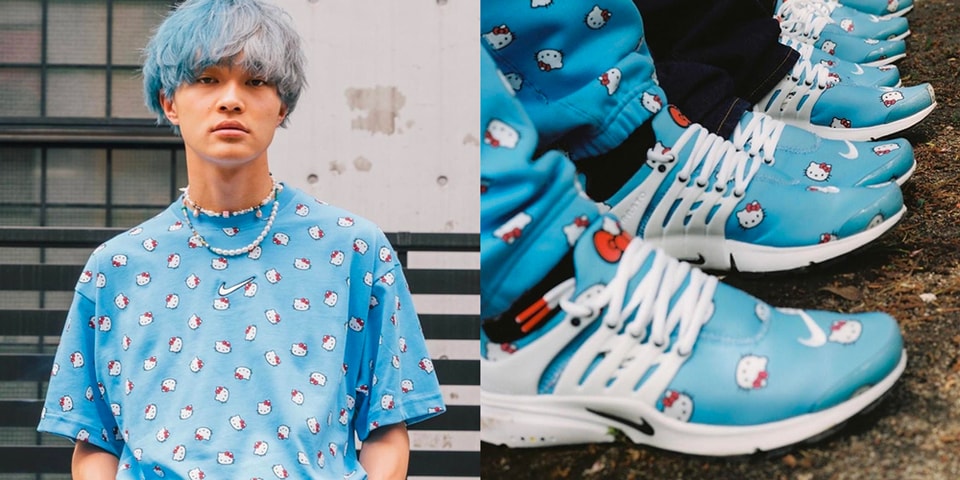 After several close-ups on the Hello Kitty xAir Presto, atmos has now released a collection lookbook, showcasing the highly anticipated capsule in full, which includes footwear as well as a limited range of apparel. Sanrio’s most popular character, Hello Kitty, is the series’ only star to appear as a floating monogram print on sky blue cuffed sweatpants, heavy cotton hoodies and t-shirts oversized. A white t-shirt with Nike Air and Hello Kitty branding teased earlier in January has also been confirmed as part of the release schedule.

Hello Kitty’s collaboration with Nike was first partially realized in 2004, bringing in Steven Smith and Hiroshi Fujiwara to design three pairs of Air Prestos as part of the animation’s 30th anniversary celebrations. A public launch having failed, an ultra-limited amount was distributed to friends and family. Almost two decades later, the duo revisits the idea with a new white/blue version available in family size.

Look for the Hello Kitty x Nike collection coming to Japan, South Korea and other select parts of Asia on May 10 with a US SNKRS Release date set for May 27.

In case you missed it, BTS reveals a three-way collaboration with MLB and New Era.