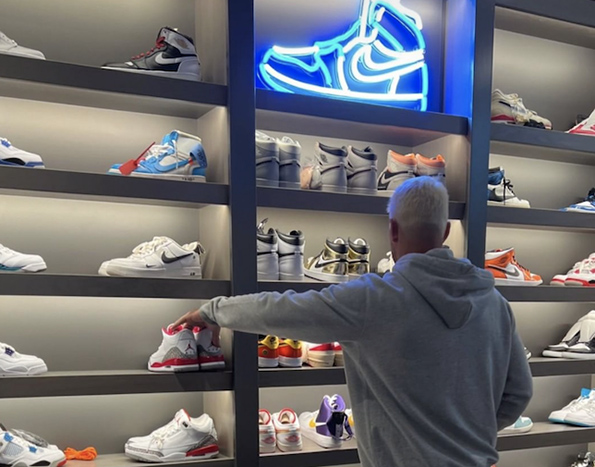 Brooks Koepka is a Nike ambassador and apparently loves his kicks so much he has a retail display in his house.

Unfortunately, according to a report in Discourse Magazine, the vast majority of Do it the brand’s shoes are made using a forced labor transfer program run by the Chinese government:

In March 2020, a damning report by the Australian Strategic Policy Institute revealed that the Chinese government was forcing hundreds of young Uyghur women to produce Nike shoes at the Taekwang factory in Laixi City.

South Korea’s Taekwang factory is one of Nike’s biggest suppliers, producing 8 million pairs of Nike shoes a year, including iconic lines such as Air Max and Shox. He has associated himself with forced labor programs run by the Chinese government that are linked to crimes against humanity.

One such program takes Turkish residents from rural areas of Xinjiang, the northwest region of China, and forces them to leave behind their children and other family members to work in factories across China. Another relocates “graduated” detainees from a network of concentration camps in Xinjiang.

According to the study of the above Australian Institute of Strategic Policy:

As of January 2020, about 600 ethnic minority workers in Xinjiang were employed at Qingdao Taekwang Shoes Co. Ltd. Taekwang’s main client is the American multinational Nike Incorporated.

Workers in Xinjiang are mostly Uyghur women from Hotan and Kashgar prefectures (political districts), which are remote areas in southern Xinjiang that the Chinese government has described as “backward” and “troubled by religious extremism. “.

At the factory, Uyghur workers make Nike shoes during the day. In the evening, they attend an evening school where they study Mandarin, sing the Chinese national anthem and receive “vocational training” and “patriotic education”. The program closely mirrors that of Xinjiang’s “re-education camps”.

The huge Taekwang factory is located in the city of Laixi, north of Qingdao in the Chinese province of Shandong, and belongs to the Taekwang Group, a South Korean chemical and textile conglomerate (chaebol). The Laixi factory in Taekwang is one of the largest footwear manufacturers for Nike, producing more than seven million pairs for the American brand per year.53

The Washington Post reported on China’s forced labor program around the same time (2020):

Workers in standard blue jackets sew, glue and assemble about 8 million pairs of Nikes each year at Qingdao Taekwang Shoes Co., a supplier to Nike for more than 30 years and one of the largest factories for the American brand.

They produce pair after pair of Shox, with their elastic shock absorbers in the heels, and the signature Air Max, as well as seven other lines of sports shoes.

But hundreds of these workers did not choose to be here: they are Uyghurs from the western region of Xinjiang, sent here by local authorities in groups of 50 to work away from home.
…
At the end of their shifts, Uighur workers — almost all women in their 20s or younger — use hand gestures and rudimentary Mandarin to buy dried fruit, socks and sanitary napkins from stalls. Then they walk around the corner, past the factory police station – adorned with Uyghur writing telling them to “stay loyal to the party” and “have clear discipline” – to the dormitories where they live under constant surveillance.

Uyghur workers are afraid or unable to interact with anyone in this city, north of Qingdao, beyond the most superficial transactions at stalls or in local shops, vendors say. But the catalyst for their arrival here is well understood.

“Everyone knows they didn’t come here voluntarily. They were brought here,” said a fruit vendor as she set up her stall. “The Uyghurs had to come because they had no choice. The government sent them here,” another salesman told The Washington Post.

More prison than factory, according to WaPo:

From the side, the facility looks like a prison. There are watchtowers with cameras pointed in all directions and barbed wire fences atop the walls, which display Communist Party propaganda posters touting President Xi Jinping’s “Chinese dream”. “All ethnicities are united in one family,” says a sign.

There is a special police station equipped with facial recognition cameras and other high-tech surveillance systems that workers must pass through when entering and exiting the factory.