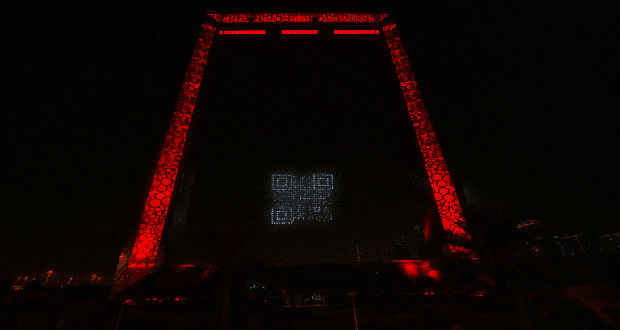 A fleet of 600 drones were used to create a QR code for the first time in the UEA to announce the launch of a new Nike Jordan store in Dubai.

AO Drones, part of the AO Creative stable of companies, was in charge of the control of the drones, which were launched inside the 150-meter-tall Frame structure, as well as the complete production of the event, including lighting.

The drones first flew in a formation that created a rotating, four-layered, three-dimensional facsimile of the famous Jordan “Jumpman” logo. It then took the form of a QR code, which potential customers could scan with their smartphone to learn more about the store.

Due to Covid restrictions the event was designed for filming. But when the footage went 3D, those in the nearby park and surrounding apartments were able to scan the code.

In order to ensure the smooth running of the event, the AO Drones team had to carry out a detailed feasibility study as the Dubai setting is not an easy area to fly, due to a highway and traffic. a nearby airport, which come with several restrictions.

This meant the team couldn’t fly the drones higher than 120m and the design had to be created with extreme precision for the code to register on the phones.

The drones were guided by GPS, using software to establish live communication between the devices.

“To obtain permissions, we had to contact the Dubai Civil Aviation Authority where our drones and pilots are registered,” adds AO Drone pilot-in-command Kevin Niedermeier. “The DCAA gave permission for the event, as did the traffic authority, the police and the government.”

With everyone’s approval and Nike pleased with the results of AO Drones, the demand for such spectacles is on the rise, as Niedermeier confirms: “We have learned from the market – especially here in the Middle East – that the number of drones from our customers request more than 300-500 per show. That’s why we’ve increased our fleet to 1,000 and plan to grow to 2,000 by the fourth quarter of the year.