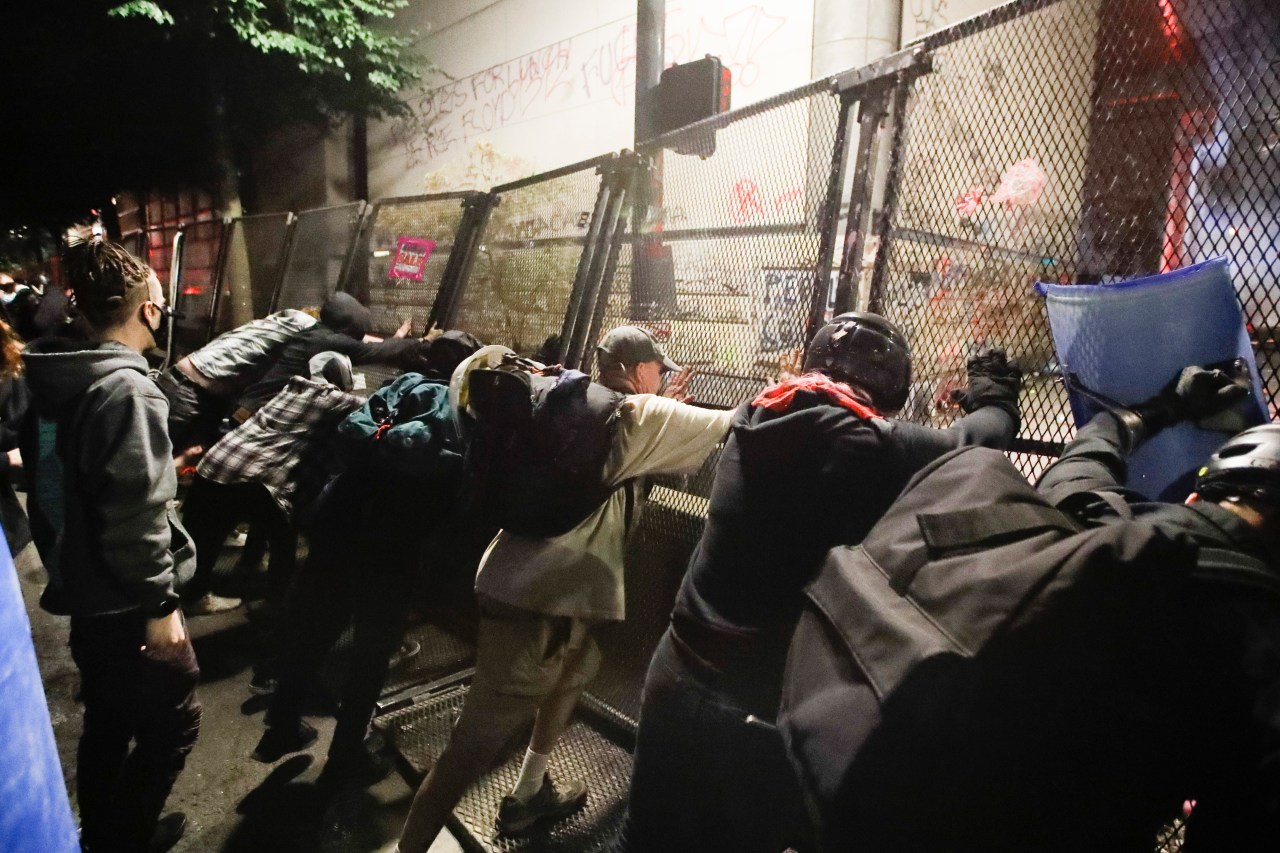 PORTLAND, Ore. (KOIN) — Multiple arrests were made around 2:30 a.m. Sunday as Portland Police Bureau officers disengaged with protesters after hours of confrontation.

PPB posted photos of the Nike store on the corner of NE Knott Street and Martin Luther King Jr. Boulevard where they say protesters vandalized the building during a march.

Federal officers lob tear gas canisters at protesters in the street outside the federal courthouse in downtown Portland after a riot was declared by the Portland Police Department on the 58th consecutive night of demonstrations in the city on Saturday night.

Several protests were held earlier in the day, including some at Northeast Portland’s Peninsula Park and Alberta Park.

Multiple protests were held in Portland on Saturday. Some were in the usual location outside the Justice Center and the federal courthouse, which saw thousands of protesters, while others took place in the various neighborhoods of the city.

The protests focused on solidarity with the Black Lives Matter movement and against police brutality, racial discrimination and the recent presence of federal law enforcement officers in the Pink City, the latter of which has revitalized the protests in

Saturday marked two months since George Floyd, a black man from Minneapolis, was killed by a white police officer who knelt on his neck for nearly nine minutes. Floyd’s killing has sparked massive nationwide protests.

At 2:18 a.m., Portland police extended the street closure area north to W. Burnside and asked people to leave the area.

At 1:19 a.m., a riot was declared by Portland police. It came after more than an hour of people shaking the fence outside the federal courthouse, the front part of which eventually collapsed. Also, people were throwing fireworks at the building, including one that inadvertently exploded into the crowd of people on the street at SW Salmon and 3rd.

After the fireworks and the shaking of the fence, federal officers, including Department of Homeland Security personnel dressed in black and other officers dressed in camouflage, entered and dispersed the crowd. , firing crowd control munitions into the street. Many were scattered west on SW Salmon St. while others were scattered north on SW 3rd Ave.

Protesters continued to occupy SW 3rd Avenue outside the Federal Courthouse and Justice Center. Drums could be heard in the crowd.

At one point, a person with a microphone stood on the steps of the Justice Center and addressed the crowd. They identified themselves as Lilith Sinclair said they wanted to speak about how the Black Lives Matter movement was co-opted and called for the need to reclaim their movement.

Shortly after Sinclair’s speech, fireworks began to explode outside the federal courthouse. Federal officers then responded by controlling crowds, according to Portland Tribune reporter Zane Sparling.

Tear gas wafted through the air.

In downtown Portland, another massive crowd of people organized outside the Justice Center. Much of the crowd moved east to the intersection of SW Naito Parkway and SW Columbia Street. Via Twitter, police said the area from SW Naito to SW 4th Ave and SW Columbia to SW Salmon was packed with people.

Shortly before 11 p.m., protesters were on the move, moving up SW Clay Street.

Also in the crowd on Saturday: Caesar, the No Drama Llama was spotted.

The hundreds of people who had gathered at Alberta Park in northeast Portland began marching south toward downtown. Along the way, protesters marched past the North Portland Police Department precinct, which has been the scene of previous protests.

Early in the day

Most of the protests focused on solidarity with the Black Lives Matter movement and against police brutality, racial discrimination and the recent presence of federal law enforcement officers in the Pink City. The events ranged from Chalk Block Event to a PDX Stripper Strike Rally. In Harrison Park, a “Stop Evictions, Stop Police Terror” event was held in the afternoon.

A supply drive for things like helmets, goggles, masks, hand sanitizer, food and snacks was held from 4 p.m. to 8 p.m. at Peninsula Park. At the same time and place there was also an event called Revolutionary SkillShare + Community Building Rally & March.

Elsewhere, another BLM event was held at Gateway Discovery Park, while at Cathedral Park there was an Educators’ March for Equity. At SW Harvey Milk and the 12th, a “Drag Queens/Kings, Nightlife Performers & LGBTQ+ Allies March for Black Lives and the End Of ICE” march was held.

In northeast Portland, at Alberta Park, a day of action against the federal invasion was organized by the Pacific Northwest Youth Liberation Front. It was an event presented as a march against the institution of the police as well as the presence of federal law enforcement in Portland.

These Rad Nike shoes are inspired by player culture