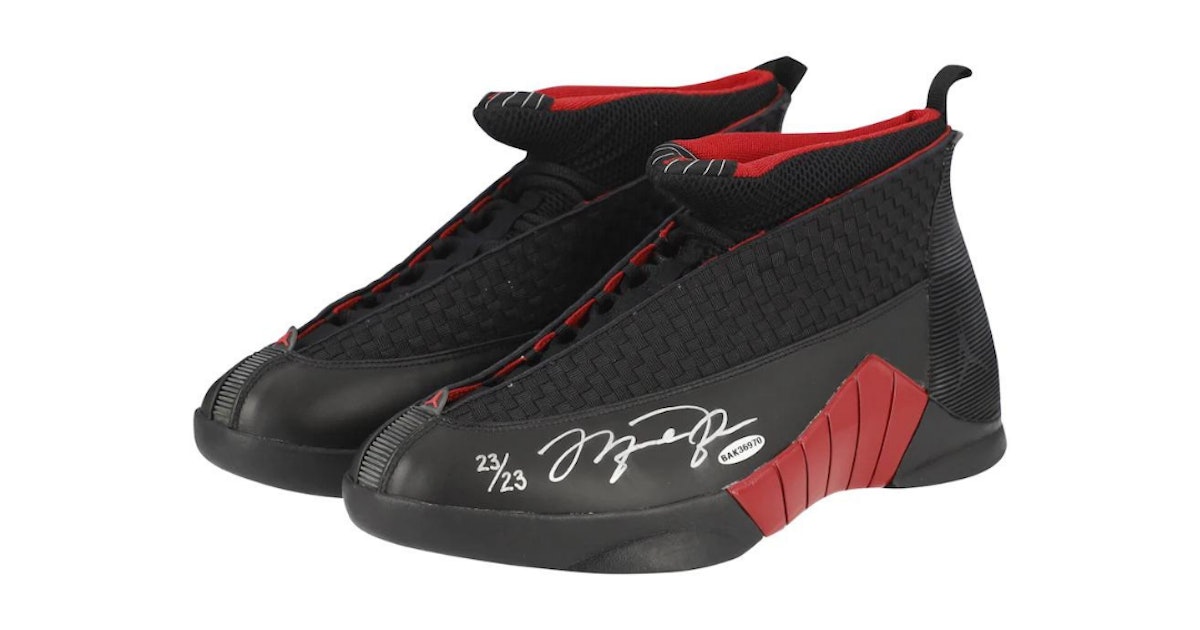 These Rare Michael Jordan Signature Nike Shoes Sell For ‘Only’ $18,000

This year, a number of rare and well-worn Michael Jordan memorabilia have been sold for thousands – if not millions – of dollars. In October, a pair of Nike Air Ships worn by Jordan in his first season in the NBA set a new record for the most expensive pair of sneakers ever sold at auction with a sale price of $1.5 million. Just prior to their sale, a pair of Jordan Brand underwear worn by His Airness himself sold for $3,341, even with (or because of) “definite use”.

The fans – or at least the fans with the money – are willing to pay any price to get as close to Jordan as possible. Next on the market is a pair of Upper Deck Jordan 15 sneakers signed by Jordan and numbered 23 out of 23 editions. At $18,000, the rare shoe is a bargain compared to other Jordan signature sneakers.

A good bet for Bulls fans – The description for the pair of Upper Deck Jordan 15s promises they’ll become “the centerpiece of your Chicago Bulls fan cave” with their black upper and bold red accents near the eyelets, collar, and sole. Details like Jordan’s signature, written in silver ink on the lateral side of the left shoe, only add to the appeal.

Still, perhaps the best detail on the shoes is its ’23/23′ marking, signaling the rarity of the pair and also aligning with Jordan’s signature jersey number. An individually numbered tamper-evident hologram, along with an official license from sportswear retailer Fanatics, confirms the sneakers are the real deal.

Think of it as an investment — For $18,000, you’ll receive the rare sneakers alongside their limited-edition box, which comes in a similar black and red palette, but in more worn condition. And in a real bargain, the Upper Deck Jordan 15s come with free shipping, which can save you around $20 considering how carefully the pair will be packaged.

Those who have the will (and the means) to purchase the signature Upper Deck Jordan 15 sneakers can do so on the fanatics site. Years later, they can probably resell the pair too, probably for more than the shoes are selling for now. Time only inflates the value of Jordan’s memories, so the later the better.