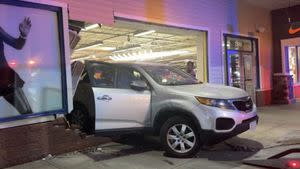 Emergency crews responded to Wrentham Village Premium Outlets after a vehicle crashed into the Nike store shortly before 8pm on Friday evening.

Emergency dispatchers initially received calls for a mass casualty incident because people thought the store dummies under the vehicle might be bodies. Fortunately, no one inside the store was injured.

Investigators believe the driver of the vehicle lost control while backing up.

“They were backing up from that spot, and they just lost control and backed up through the store,” Deputy Fire Chief Robert Maduskuie said.

A mother and her two daughters were in the vehicle at the time of the accident. They were first treated on the spot before deciding to go to the hospital for an evaluation.

Boston 25 News has contacted Simon Property Group, which owns the outlets, and is awaiting a response.

The crash is still under investigation, no charges have been filed at this time.